We've been back in Kathmandu for three days now but finding enough time to write this has been tough.


Our little team enjoyed a great flight via helicopter from Kathmandu to Lukla on October 21 to start our trek. We chose a helicopter as the airport in Lukla has the dubious distinction of being the world's most dangerous commercial airport. Helis are safer at this particular airport and also tend to fly in "iffy" weather while the planes are all grounded. This made it more likely for us to stay on schedule.

Each day we would walk a little higher, taking care to not go too high too fast and risk having altitude sickness problems. We first reached reasonably high altitudes when we crossed the 17,600' high Renjo La (pass). It took a little huffing and puffing but everyone made it without any real problems and the views we were rewarded with were phenomenal. This picture shows Soni touching the top of Mt Everest. 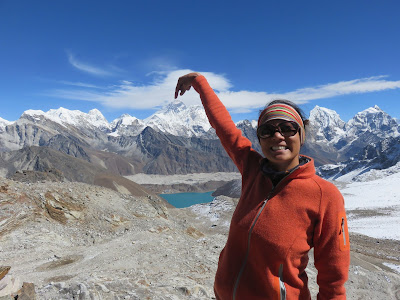 I have learned over the years to expect little unscripted magic moments in Nepal and we were certainly blessed with one on this day. We had walked down from the top of the Renjo La for about ten minutes when we were greeted by Galgen Sherpa, the father of my friend Tenzing Sherpa in Gokyo. He and another guy had walked two hours up the pass and brought us a delicious hot lunch plus tea, Coke and dessert. The food was wonderful but the gesture of friendship was even better. 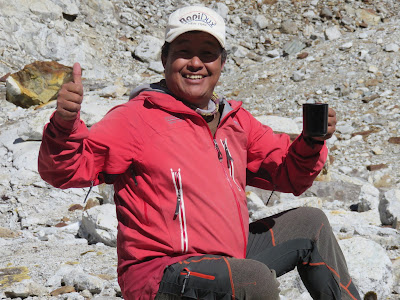 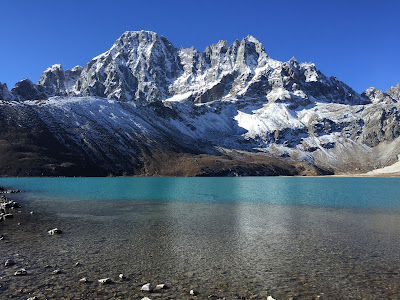 The following morning found most of the team marveling at the views of Everest, Nupste, Lhotse (4th highest in the world), Makalu (5th highest) and Cho Oyu (6th highest) under cloudless skies when we climbed the nearby Gokyo Ri. 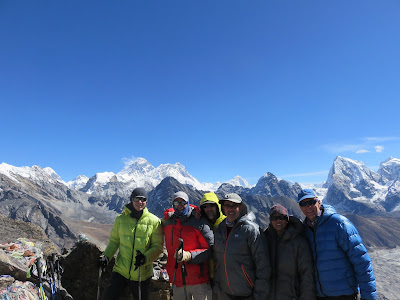 Our next big effort was to cross the Cho La (pass) at 17,800'. It had snowed the previous day so things were a little tougher than normal but everyone put in the effort it took and we soon found ourselves in the tiny village of Dzongla drying out wet shoes and socks. The next day we walked to Gorak Shep at 17,000' and settled into the Bhudda Lodge. We had great weather in the afternoon for the first time on the trip so we took advantage of it and quickly hiked up Kalla Patthar (18,300') and were blessed with an amazing scene as the sun set on Everest and Nuptse, turning them golden. 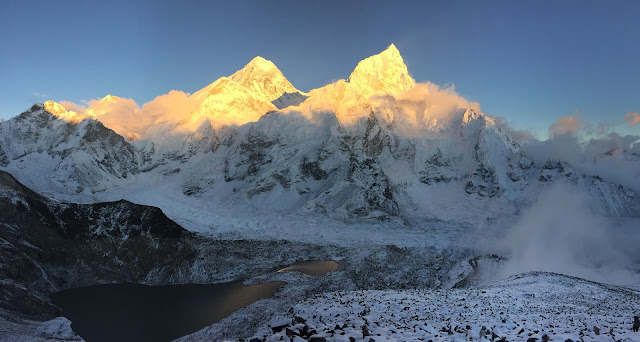 The following morning we walked up to the Everest Base Camp at 17,500' and stepped briefly into the infamous Khumbu icefall. From there we retreated several miles down the valley to the village of Lobuche to spend the night. 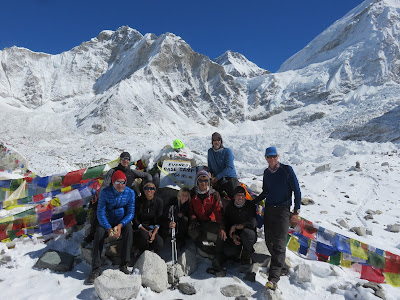 The next morning we hiked right past the Lobuche East base camp and moved directly to Camp 1. Here we did some skills lessons on Himalayan climbing using fixed lines, rappelling and crampons. We finally went to bed around 6:30 in anticipation of a 3:00 am wakeup time. Opinions differ on the elevation of Lobuche East, but it is somewhere between 20,100' and 20,200' high. 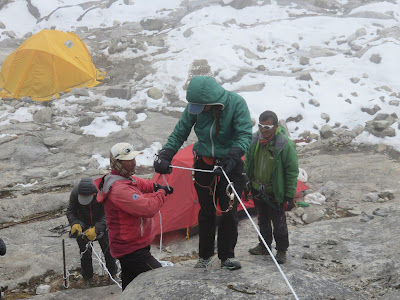 Our early morning start was cold but we were comfortable in our warm clothing and boots. After a hearty breakfast, we left around 4:20 am. The going was quite steep at times and it took the group about six hours to reach the summit. We were blessed with absolutely perfect weather. The sky was a deep blue, there was no wind and the temps warmed up dramatically as we climbed. The views from the summit of Everest, Lhotse, Nuptse and Makalu and all the other lesser peaks are some of the finest you will see anywhere in the world. 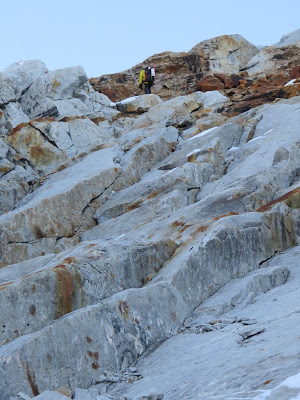 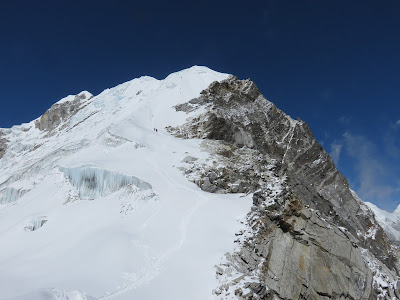 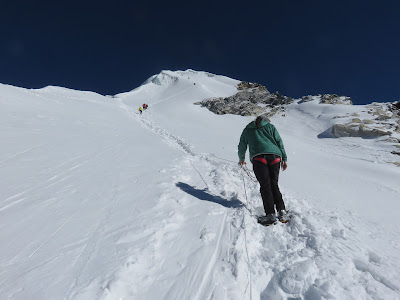 More views from the summit


We enjoyed a long visit on the summit and then retreated down to Camp 1. Here we ate a little, drank some tea, packed up our belongings and then walked down for another 90 minutes to the teahouse at Lobuche. We were very tired but felt very satisfied with our efforts and with the day.

It was mostly downhill from here and we spent three days walking back to Lukla. 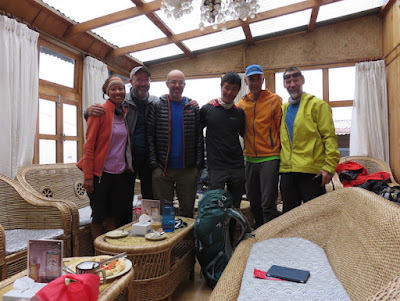 Saying goodbye to Mingma Sherpa at the fake Starbucks in Lukla


Since our return to "normal" life in Kathmandu we have been eating a lot of great food, basking in the warmth of the lower altitude, sleeping in a little, and enjoying the reliving of our adventures. I think everyone is in agreement with me when I say that the scenery and adventure was more than we could possibly expect (even after being here many times) but what really impresses me every time is the wonderful people of Nepal. 2015 has been a particularly difficult year, starting with the 7.8 earthquake on April 25, the many aftershocks culminating with a 7.3 quake on May 12 and now the fuel embargo that India has imposed on Nepal for not doing what it wants with their internal affairs. The country has been truly brought to its knees as people have virtually no gasoline, diesel, aviation fuel or cooking gas. Tourism is drastically down, their fragile economy is being harmed and people can't move around like they normally do and yet everywhere you go you see smiling faces and people laughing and enjoying their lives. The Nepalese people are truly amazing and I love being with them!


We owe a special debt of gratitude to Sange Sherpa, a good friend of mine who joined us to help me lead the trip. His cheerful face and quiet strength were always a welcome sight. Assisting him was Mingma Sherpa who was our porter, carrying a group gear bag with overflow clothing and equipment. He may have begun as a porter but quickly became a valued member of our little team and we all felt saddened to say goodbye to him in Lukla. Thanks are also due to Biri, our cook on Lobuche East and his small crew of helpers. They established our camp for us prior to our arrival and fed us very well.

Passing Ongchu Sherpa and Sange Sherpa put in the fixed ropes for us on Lobuche East, without which we would not have been able to summit. Passing Ongchu is one of a very small handful of UIAGA certified Sherpa guides in the world and his strength and skills are beyond amazing. Climbing with these two gentlemen is like playing basketball on your driveway with Michael Jordan and Shaquille O'Neal. They are incredibly overqualified for the job, but it is so reassuring to have them along to help us wannabes.

Thank you for reading along with us,

Posted by RobertKay at 1:05 PM