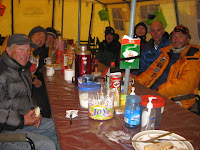 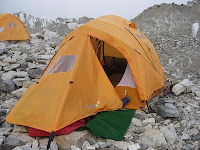 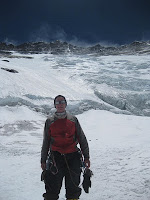 I am currently in one of the rest phases between acclimatization rotations. Since humans aren't designed to live at high altitudes we need to approach them slowly in order for our bodies to adapt. One of the proven ways to do this is to climb up high for a few days and then come back down lower in order to recover. If one does this several times and goes higher each time, one eventually can go really high and be okay.

We climbed Lobuche East (about 19,500) on April 16, returned to the Everest Base Camp the following day and rested for several days. next, we climbed up through the Khumbu Ice Fall to Everest's Camp 1 at about 19,700' and spent two nights. We then went up to Camp 2 at 21,100' and spend another two nights before descending all the way to Base Camp again. This is where I am now, although I have walked two hours down to the tiny village of Gorak Shep at 17,000' to use the Internet. I think this must be the world's highest Internet cafe.

The Khumbu Ice Fall is often called the most dangerous part of the climb. It is a glacier that is funneled down through a narrow and steep valley which causes the ice to break up into huge chunks, often much bigger than a house. The ice is constantly in motion so an ice block can fall at any time and crush anyone in it's path. To add to the excitement there are some hanging glaciers high above the ice fall that can also avalanche from time to time. The strategy is to enter the ice fall by 4 or 5a.m. and get through it as fast as one can before the sun heats things up which makes the ice more active. Another challenge ones needs to face is the crossing of deep crevasses. These can be over 100'deep and quite wide. There is a team of Sherpas called the Ice Fall Doctors who establish the route, "fix" it with ropes to which one attaches via harness and a carabiner, and most importantly they haul aluminum ladders up there and use them as bridges over the crevasses. If the crevasse is too wide, they will lash multiple ladders together with rope. It is quite nerve wracking when first crossing on these "bridges", but I found I've gotten used to it.

I would be very remiss if I didn't mention the Sherpa people again. These people are so strong that is embarrassing for the rest of us mere mortals. They carry loads that we can't imagine, walk and climb at twice our speeds and never seem to tire. They are always cheerful and eager to help with any task big or small and are just fun to be around. There is not doubt that only a very small portion of Everest climbers would have any chance of climbing this enormous mountain without their help. My Sherpa guide is named Nima Nuru and I wish I could take him home with me. One would be hard pressed to find such a patient, kind and competent person. My slow pace must drive him insane, yet he never shows it. He leans down and picks up the rope for me every time I need to clip and unclip(scores of times in the ice fall), reminds me to put on my sunglasses when the sun comes up,insists on carrying anything of mine that he thinks might be heavy, helps me with my equipment such as crampons and checks on me in my tent in case I might need something. I have asked him to go ahead of me in the particularly dangerous portions of the ice fall, but he refuses saying we are a team. He is awesome!

In a day or two we will again climb to Camp 1 and Camp 2, but will then also go up to Camp 3 at about 24,000', two thirds of the way up the Lhostse face. That is the glaciated slope you can see behind me in the photo. It is a miserable camp site carved in the side of the mountain (by the super human Sherpas) where you must wear your crampons and be clipped to the ropes if you exit your tent because this is an absolute no-fall-zone. We will spend a night there before descending to Base Camp for a final rest. We then wait for good weather and make our summit attempt which will be six or seven days of constant climbing.

I am feeling great - my appetite is good, I am sleeping well and staying healthy. Beside the "Khumbu cough" which virtually everyone has, I have had a problem with my right knee. It started hurting a couple of nights ago for no apparent reason, but seem to be much better now. The Khumbu cough is caused by the cold, dry air, not a virus. It strikes me most when sitting and talking; the least when I am sleeping or climbing. I wear a buff (sort of a face mask) most of the day and night, removing it for eating and drinking or when really breathing hard on a steep section. Since everyone else is doing the same thing I joke that we look like a bunch of bank robbers.

Our base camp is quite nice - I know I have mentioned it before. I have my tent set up nicely and even have a "carpet" make from a blanket I bought on the way in. My tent is quite roomy. I have a piece of AstroTurf outside as my front lawn. Everyone uses pee bottles at night, so I guess we even have limited indoor plumbing.

We have a great team of people and I am getting along with all of them. There are people from the US (California), Canada, Singapore, Taiwan, Japan, Scotland, Greece, and the Czech Republic. Unfortunately, five members out of a total of 24 Everest climbers have quit due to illness or personal issues.

I am in need of fresh orange juice and Patty's cooking. I know I have lost at least ten pounds already and expect to lose another 20 before finishing.

I really can't answer each of your replies, due to the difficulties in getting to the Internet, but I love reading them and will eventually get back with you individually.

Thanks,
Robert
Posted by RobertKay at 8:56 PM