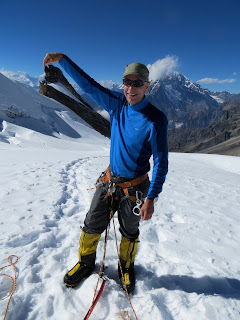 It's almost show time again for me. My attempt on Everest in 2010 got me close to the summit but close doesn't count so I'm signed up again for a second shot at reaching the top of the world's highest peak. I leave for Kathmandu on April 2 and arrive on the 4th. After two days in this fantastic city I leave with the rest of the Altitude Junkies (AJ) team for Tibet. You can read more about our itinerary and expedition details at   http://altitudejunkies.com/.

I chose AJ because of the wonderful experiences I've enjoyed with Phil and his crew on Manaslu and Ganesh Himal. Every guiding company makes similar claims on their websites - best Sherpas, best cooks, etc - but Phil backs it up. Our base camp will have heated showers, a heated dining tent, a recreational tent with a projector for watching movies and truly the best food. Phil is famous for his 4pm happy hour that frequently features sushi. In a past life he and his fantastic wife Trish owned and ran several bars and restaurants and his emphasis on eating well is genuine. This may sound like the ramblings of an old, soft wannabe from Nebraska, but after being at high elevations for long periods of time I can say without hesitation that eating well is not only difficult but also key to a successful and safe climb.

Beyond the great food, Phil also has a fantastic team of Sherpa guides. His guys are a little older - typically in their 30's and 40's - and I feel that this age brings a little wisdom when conditions turn bad. A young Sherpa might push a little too far in bad conditions in trying to summit as it's great for his resume and future. The downside is that while they're strong enough to get away with it, most Westerner's probably aren't.

Finally, I really enjoy spending time with Phil and Trish. They are extremely nice and also interesting people and when you are on a long trip in relatively close confinement with a small group of people it is nice if you enjoy their company. Phil won't accept just anyone on his trips and does a little vetting of potential clients to ensure they will be a good fit for the team and I appreciate this.

Anyway, enough about all of this stuff. I'm working hard at my conditioning and believe I have 99.9% of my gear organized. I started doing two-a-days this week to be as strong as I can be when I leave. I climb my Jacob's Ladder machine   (http://www.jacobsladderexercise.com/) in the mornings and then spend about two hours each evening at the gym. I also am trying to add in some big days outside on my bike or skis as time allows. I feel like I'm prepared physically and just as importantly I'm mentally ready.

We will follow the north ridge route up Everest, walking in the footsteps of Mallory and Irvine plus dozens of other famous climbers. I know two of the team members from prior climbs and like them a lot and I'm sure that the others will be great also.
Posted by RobertKay at 4:49 PM